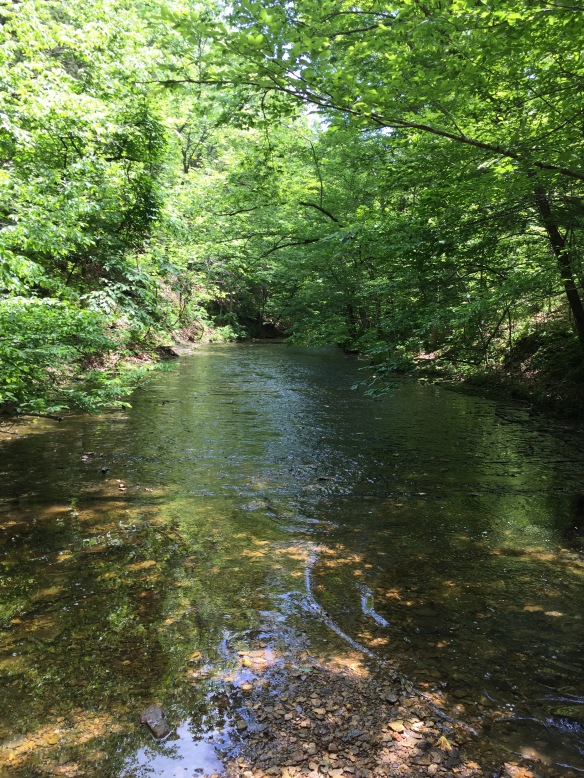 I have a confession: after years of publicly describing my affection for the writing of Wendell Berry, yesterday I finished Jayber Crow for the first time. I cried as discreetly as possible over the heartbreakingly beautiful final pages as I sat alongside this serene creek that feeds into the Cumberland River and among the less serene noises of my family and our friends playing in the creek.

I’m convinced that Jayber may be Berry’s most important work, and I started reading it quite a long time ago. At times I couldn’t quit reading it; other times I was so afraid of coming to the end of it that I read very slowly or put it down for weeks. And then sometime last year, I found myself two chapters from the end, and I set it aside for many months. It never left my mind for more than a day or two, but I left the book unopened until yesterday. I’m not quite sure why yesterday.

While I own dozens of half-read books, those remain unfinished because the author bored me or because I’m too easily bored. This was something else. This was an actual fear of leaving Jayber Crow’s world – or, more precisely, leaving the world as Jayber Crow experienced it.

Jayber’s world is Berry’s partly fictional community of Port William, Kentucky, and Berry has written enough novels and stories about that world to allow me to stay there for some years yet. If given that oft-fantasized choice to live in any real or imagined time and place I’ve known in my almost 41 years, I’m almost certain I would choose to live in Port William, Kentucky in the first half or so of the 20th century.

That impulse isn’t escapism, exactly. Berry’s fiction is so powerful because it is so real. Port William is no utopia, but I see the world more clearly as it was meant to be in the simplicity, beauty, and brokenness of this tiny farming community along the river. I think I want to return there again and again (and would go there given the choice) not because it is free of darkness or hardship, but because I see a way back to innocence and forward to redemption in the light of Port William’s sun, in the shadows of its trees, and in the drifts of its snows.

But Berry’s real gift to me (and to you if you know what’s good for you) is not that he creates a fantasy into which I can escape, but that he allows me to believe that the world once envisioned and created with care and beauty can be reimagined and recreated to its intended purpose. Today I might choose Port William, but the more time I spend in that world, the more hope I have for its beauty in my own. And that hope gives me the courage to choose and to love the world I’ve been given.