I’m always aware when September 19 rolls around. It’s the date that both my grandmother and Rich Mullins died – Mamaw seven years ago, Rich fifteen years ago. It’s also three days after September 16, the date my grandfather died and that Amy’s dad was born. Papaw died thirty years ago, and Tom would have been 74 this year (he died in 2001). For lots of reasons, I’ve thought about all of them a bit more this year. I wrote some about my developing relationship with death, but I’m too tired to finish those thoughts in a coherent way. Soon. Until then, below is a rerun of what I wrote about death, Mamaw, and Rich seven years ago. I also wrote some about these things a couple of years ago here.

A good day to die

Eight years ago, back in my single metrosexual almost-North Dallas days (I don’t really know what metrosexual means, but it makes my early 20s sound more exciting, don’t you think?), I got some sad news. My friend Brad and I walked into his apartment and were greeted by a message from Brad’s roommate, a big red-headed guy named Pape (which is illogically pronounced “Poppy”). Scrawled barely legibly on a scrap of paper was this note:

Both the news itself and something about its delivery were startling to me. Why would God let Rich Mullins of all people die now and why am I finding out from a stupid note like this? Silly questions, of course, but those were my initial reactions. Strangely, though I don’t remember doing it, I apparently stole the note and kept it (sorry, Brad). I only know this because I ran across it as I was shuffling through a box of miscellaneous evidence of my pack-rattery during one of our recent moves. If I had a little more energy, I would dig around for it and scan it instead of retyping the note above. The possibility that it’s in one of the 22 boxes still stacked in our garage just barely persuades me that such an effort is completely unnecessary.

Anyway, as I think I’ve said somewhere before, Rich is one of the only people I never knew who I genuinely feel like I miss. One of my first blog posts ever alluded to this. It’s okay if you think I’m weird. I just listen to him sing and read his words and feel like he knows me better than a lot of people who actually know me. I feel like he knows life the way I know life; knows Jesus the way I know Jesus; knows failure and ache the way I know failure and ache. I think lots of different people who live very different lives feel that way about the guy, and I think that says something meaningful about the residue of his life (a phrase he’d probably like).

My point here is not to gush endlessly about Rich. I’m not writing about Rich and the day he died because Monday marked eight years since he crossed over. Not really. I’m writing about him and the day he died because Monday, eight years after Rich died, I held my grandmother’s (Mamaw to all of us) hand as she made her own crossing. After a long life in this realm that we see and smell and touch and hear and taste, her lungs quit breathing and her soul slowly vacated the broken-down body it had inhabited for nearly 93 years. My cousins David and Jesse were also at her bedside, and Amy and David’s wife Linda stood behind us as we did what we could to help escort Mamaw from here to There. 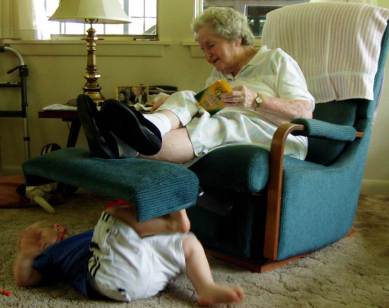 I don’t really know what those moments were like for Mamaw. She was still and peaceful – obviously more comfortable than she’d been in the days (years, really) prior. She didn’t speak to us or acknowledge our presence in ways that we could see or hear. That had ceased the night before, when several of us had spent time with her before the medications sustaining her body were pulled back. In moments Amy, my Aunt Molly, and I will never forget, Aiden sat on a stool by Mamaw’s bed and poured three year-old tenderness all over her. Writing about it would fail to convey the ways in which his reassuring words, soft hands, and sweet smiles created life all around a dying woman.

But Monday morning was quiet. We touched her and spoke to her in whispers. Though she didn’t physically respond, I sense she was more alive than ever, as the her that was slowly became the “new her” with each fading breath. She wasn’t gone, and the shriveled shell on the bed didn’t define her. It never really did; it just appeared to. Dying just sealed the deal, finally divorcing her eternal identity from the physical confines of flesh and bone (and arthritis).

Mamaw was ready for this, and she had been for some time. In some ways she’d been ready since that day in 1982 when Papaw went on ahead of her. Most days her readiness was dignified and patient, tempered by her love for all of us and her faith in God’s curious wisdom. Other days it was less steady, driven by the frustration of pain and immobility or a deep ache to be with her Cecil. I understand and love her for both. She was faithful and sure; she was tired and fragile. I’m 63 years behind her in this journey, and I get all of that.

But I don’t think she was the only one who was ready. Tonight I talked with my cousin David, and he described a keen awareness in those final moments of Papaw waiting for her, pleased as punch that the three grandsons who could get there were by her side. David didn’t see a ghost or hear any voices; he just knew Papaw, and he knows Papaw was on hand for the big event. I wonder if we are too inclined to discount ideas like that, maybe because we’re skeptical of what we can’t see and maybe because years of powerless religion have convinced us that all the supernatural stuff happened a long time ago.

They tell us a “cloud of witnesses” continually surrounds us, apparently looking on with anticipation as we run the race marked out for us. This moment was the end of Mamaw’s race, but it was a meaningful bend in the course for the rest of us. I think David is right. I think Papaw is in that cloud — he’s probably the designated cloud farmer and janitor — and I think he’s ecstatic to have Estelle join him in keeping an eye on us. I know she is thrilled beyond all imagination to finally be with Cecil and Jesus.

Tonight I was struck by the realization that Mamaw and Rich left us on the same date. It may seem insignificant to everyone else – old folks die and famous musicians seem to have a strange and disproportionate tendency toward fatal accidents. I don’t theorize that there is some deep, divine meaning in the coincidence. I mean, these people never heard of one another. Rich smoked and cursed. Mamaw was a true, old school Southern Baptist who shocked the world when, in her last weeks as her health deteriorated, she answered a group of church folks visiting her in the hospital who asked if they could pray with her with an emphatic, “Hell yes.”

There seems to be no connection between the two but the day they died. Well, that and this: they loved a guy named Jesus desperately, and they lived their lives to follow him as best they knew how. Neither had it all right, this living as a Christian. Rich probably loved his liberty (and nicotine) too much at times. Mamaw may have been a bit too committed to certain religious traditions (like being Southern Baptist). They were both humanly flawed and incomplete. They were both heroically devoted and faithful.

So, strange as it may seem, I wonder if Rich was in that cloud that greeted Mamaw on Monday. Maybe it was his eighth birthday party and he wished for a widow to be rescued into eternity. Maybe Papaw caught him smoking in his corn field and promised not to rat him out if he’d make that wish. And maybe those wishes really come true on the other side. Who knows why September 19 is such a good day to die, but it’s two-for-two in my book.

Whatever the story, Mamaw is home — with a chain smoking vagrant named Rich, a jolly Texas logger and farmer named Cecil, and that guy named Jesus who she followed to the end.

Mamaw, I’m glad you finally made it, and it was an honor to sit next to you on your way out. Oh, and if you’re “looking on,” go easy on the ones like Rich. I know they seem like ruffians, and maybe you never expected to see them up there, but don’t lobby to get the rules changed or anything. Some of your grand-kids are taking the same route those hoodlums took. We weren’t allowed to tell you that before, but all those secrets are history now, aren’t they? 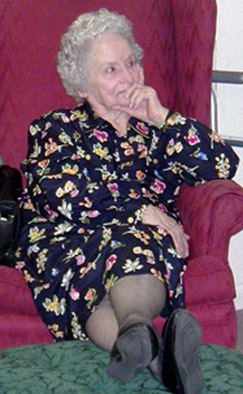